Succeeding in Our Public Schools

For centuries, people of color in the United States of America were banned from public schools.  These laws, which were prevalent in the South but also were passed by state legislatures in the Southwest and Midwest, segregated blacks and whites in all aspects of public life, including attendance of public schools.  (“Jim Crow Laws”. National Park Service. Retrieved 1 November 2013.)

This began to change in 1954, when a unanimous U.S. Supreme Court decided, in Brown vs. Board of Education, that segregated schools were inherently unequal, in violation of the equal protection clause of the 14th Amendment to the United States Constitution.  But for many years, most southern states ignored that landmark ruling.  Most states throughout the South maintained two school systems, one for white students, and another for black students.  They called the black schools “separate, but equal” to the white schools.

As a civil rights worker in the 1960s and a speaker on civil rights in the United States, I am often asked what are issues today that reflect the Freedom Schools from the Mississippi Freedom Summer of 1964, where I was a teacher.  One of the most important issues is that of a quality education, which our system of public education provides to students the necessary basic skills to engage and compete in today’s environment. 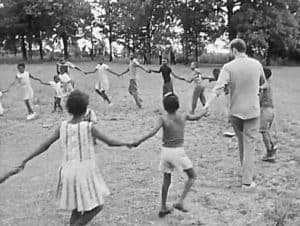 Freedom Schools provided remedial education to children and adults who were prevented from attending the all white public schools by a section of the Mississippi Constitution. Freedom Schools helped to address this disparity of education that was imposed on the black community.

In 1964, all the schools in the state of Mississippi were segregated.  The black schools were in session about four months out of the year, and the white schools were in session nine months of the year.  The reason for this disparity was that black children were expected to be in the cotton fields with their parents.  White children did not share that burden.  As a result, black children got a substandard education, whereas white children were given the full benefits of a public education.  Most of the students and parents we served at Freedom School had undeveloped or underdeveloped basic skills for reading, writing, and mathematics.

President Trump and Secretary of Education Betsy DeVos have made clear that their chief educational priority is to expand school choice, including privately run charter schools, voucher, and similar programs that use public money to pay for private and religious school education. They both have criticized the traditional public school system, America’s most important civic institution, which educates the vast majority of the country’s schoolchildren.  (Valerie Strauss, Washington Post, July 20, 2017)

Secretary DeVos said:  “After the Brown decision, many school districts, especially in the South, resisted integration. In Virginia, white officials in Prince Edward County closed every public school in the district rather than have white and black children go to school together. They opened private schools where only white parents could choose to send their children. And they did it using public money.”  (Valerie Strauss, Washington Post, July 20, 2017)  DeVos wants to expand the private school model by diverting resources, public money, from our public schools.Today, ninety percent of all children attend public schools. U.S. Department of Education Secretary Betsy DeVos called public schools a “dead end.” (Valerie Strauss, Washington Post, July 20, 2017) Our public schools aren’t a dead end. They’re places of endless opportunity.

Public schools are, in theory, for everyone in America, as they are funded with tax dollars.  But that wasn’t the case in states where segregated education was prescribed by law.  And simply attending a public school does not mean the student will succeed in learning.  There are many reasons for student success and failure.  But most failures are based upon a lack of basic skills, which include reading, writing, and arithmetic.  And the teaching of these basic skills was not successfully carried out in segregated schools.

I directed a successful educational program at a publicly funded middle school in a Latino neighborhood in Escondido, California.  These students have low graduation rates, high poverty, and a high percentage receive federally subsidized breakfasts and lunches.  Their parents are perceived by the teachers as not being involved in the education of their children.  85% of the parents speak Spanish but less than 10% of the teachers and no administrators are bilingual in Spanish.

That program details how a multi-pronged attack on the identified problems in a publicly funded school system can result in positive changes for the students, parents, teachers, school administrators, and in a minority community.  [Prickett, C.  (2002). And College for All.  Principal Leadership, High School Edition, v. 2, no. 9, pp. 35-37] Two years later, the program was expanded to two publicly funded secondary schools, also in Escondido.   Here is an account of a minority student in that program:

“Erika is now a tenth grade student.  But passing her ninth grade courses was not an easy task.  She had a rocky start in her secondary educational experience.  For Erika, just beginning the transition to high school became a nightmare.

“I was failing everything, except P.E.”, she lamented.  “I was afraid to talk in class.  I was so afraid that I was doing everything wrong, that I did not turn in any work.”  Erika just froze when it came to participating in class and handing in schoolwork.  She felt lost and without hope.  Rescue came in several ways. 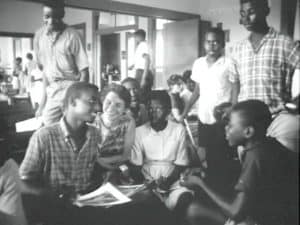 First, Erika’s counselor, Mr. Ibarra, suggested that she take advantage of free tutorials offered daily after school.  “He said I had to raise my grades.  If I didn’t, they would kick me out of school.  I felt scared, but I had to do something”, she explained with a frown. Second, Erika went to the tutorial sessions after school.  She didn’t know what to expect or how she would be treated.  “They helped me write essays and do my math.  The teachers explain it differently, but I got it when they explain it here”, she said, referring to the tutors who helped her.  Erika started doing her work and handing it in.  She was surprised at her sudden progress.  She began passing all of her courses and her grades improved week by week.

“I got A’s on all my essays”, she said proudly.  “Now I understand what to say in class, where I didn’t talk before.  I feel better about myself and my parents are happy.  I want to go to college now, whereas before, I didn’t want to go to high school.  I just hope my little brother and sister don’t have the problems I did.”  [Prickett, C.  (2004).  And College for All: Revisited.  Principal Leadership, High School Edition, v. 5, no. 4, pp. 28-31]

Unfortunately, Erika’s story is not unusual.  Without the support she received, it is likely that she would have abandoned her high school experience and found a low paying job.  The future looked bleak and she had low self-esteem.  But it is also encouraging that Erika turned her life around so quickly with the support of publicly funded academic tutoring.  Clearly, she had the ability to succeed academically, but the new environment of high school was so intimidating and lacking in needed support that she felt lost and unable to succeed.

All students can succeed in our public schools.  Some students, such as Erika, just need support.   After school tutorials and in class tutors have made a significant difference in Erika’s life.  We need to support our public educational system so all students like Erika can succeed.

The Latest from the Freedom Blog

During the summer of 1964, I was one of about 1,000 volunteers who came to Mississippi to assist SNCC (Student Non-violent Coordinating Committee), CORE (Congress of Racial Equality), and COFO (Council of Federated Organizations) in the struggle for civil rights. During that summer, we operated Freedom Schools, organized the Mississippi Freedom Democratic Party, tried to…

Critical Race Theory is not being taught in schools, except seminars in grad school or law school. I see all those people shouting about CRT as a threat to their child’s education as uninformed and frightened racists.  A legislator in Tennessee said his reason for proposing legislation to keep it our the public schools is ‘I…

Bring Racial Diversity to Your Organization

I have spent my life helping others learn and grow in the area of racial diversity. It has been my mission in life. I want to help you contribute where, and how you can.

Diversity Statement for Your Organization

John Lewis:  A Brother I met John Lewis during the1964 Mississippi Summer Project, later known as  Mississippi Freedom Summer.  I had heard him speak at the March On Washington in August of 1963.  He was very focused and forceful, but his speech was changed because some felt it called for violence, and the following passage…

Civil Rights: Then and Now

Civil Rights:  Then and Now The civil rights movement in the 1960s is being reflected in today’s movements, but it appears history is repeating itself in the public perception of today’s Black Lives Matter (BLM) movement to the Civil Rights Movement of the 1960s.  There are many more similarities and differences, but the main difference…

Succeeding in Our Public Schools

Changing Our Public Schools… For centuries, people of color in the United States of America were banned from public schools.  These laws, which were prevalent in the South but also were passed by state legislatures in the Southwest and Midwest, segregated blacks and whites in all aspects of public life, including attendance of public schools. …

Voting in America… The United States of America is a democracy.  All citizens vote in elections to elect public officials, approve or disapprove taxes, and a wide range of other issues, depending upon the state in which the voter resides.  Except that all citizens cannot vote.   Historically, people of color were denied the right to…